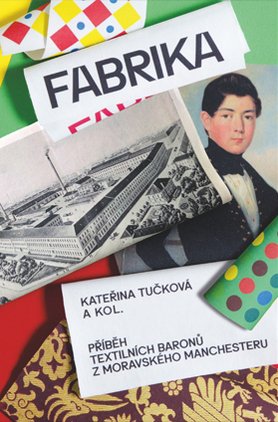 THE FACTORY: The Story of Textile Barons of the Moravian Manchester

During the period of its greatest fame, Brno used to be called “Moravian Manchester”. Fabrics made in the local textile factories were exported to the whole world and the rapid industrial boom of the city in the 19th century changed the city into a self-confident and modern metropolis. Famous villas, the railway station, streets and parks, and even the local slang – “hantec” – owed a lot to the growth of textile industry. The downside of the boom, however, were the strikes of impoverished workers, social problems, and orphanages full of children working from dawn to night in dusty and noisy factories.
The book tells the story of five generations of Johann Heinrich Offermann’s family who came to Brno as a poor expert on wool in 1776. Soon, he founded a factory and became one of the most powerful textile barons. The story of his family also reflects the 250-year-long history of Moravian Manchester. The book contains explanatory texts and photographs from the Brno archives, and it is a perfect guide to the forgotten textile history of the city. It was published on the occasion of the exhibition Brno – Moravian Manchester, held in the Moravian Gallery in Brno at the turn of 2014 and 2015.

“Tučková describes the development, accomplishments and crises of the Brno wool industry. More general reflections in the first-person narrative alternate with “cut-ins” into the significant moments of the private and business life of the Offermann family. The writer obviously tried to get to know her heroes as much as possible; some (fictional) dialogues sound as if she was really there.”
Veronika Havlová / Respekt

„Tučková is a talented storyteller. Her narrative style is intriguing, understandable, dramatic, without political bias, and most of all, it is truthful.”
Jiří P. Kříž / Deník Právo