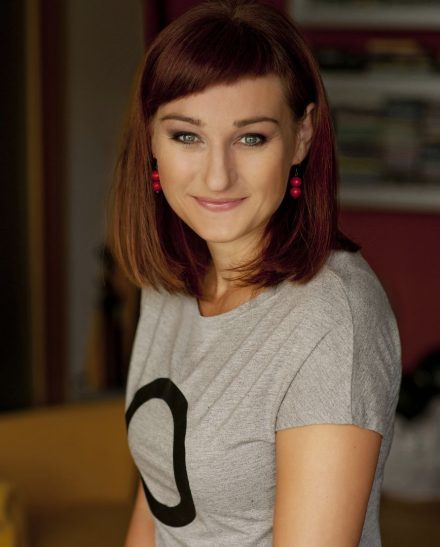 Kateřina Tučková is a Czech author, playwright, publicist, art historian, and curator of exhibitions. She has won several literary awards, including the Magnesia Litera Award and the Czech Bestseller Award. In 2017, she was awarded the Freedom, Democracy and Human Rights Award by the Institute for the Study of Totalitarian Regimes. She also has received the Premio Libro d’Europa at the Book Fair in Salerno, Italy. Her books have been translated into twenty languages.

Kateřina Tučková was born in Brno, Czech Republic, in 1980, and grew up in the village of Moutnice and then in the town of Kuřim. After grammar school (1995–1999), she studied art history and Czech literature at the Faculty of Arts, Masaryk University (1999–2006). During her studies, she moved into a small flat in the quarter called the “Bronx of Brno”, which witnessed the post-war displacement of Germans who were forced to leave the city in the “Brno Death March” in May 1945. This fact inspired Kateřina to write her novel The Expulsion of Gerta Schnirch (Host, 2009) about a girl from a local Czech-German family.
Her first novel was Montespaniáda (Větrné mlýny, 2006), but it was her second novel that gained more attention. It was shortlisted for the Jiří Orten Award and Josef Škvorecký Award, but eventually won the Magnesia Litera – Readers’ Award (2010). In her third novel, The Zitková Goddesses (Host, 2012), Kateřina Tučková focused on Czech history again. The novel is about a family of gifted women healers from the White Carpathian region who survived witch hunts and the oppression of churches and the Protectorate authorities to be eventually destroyed by the recklessness of the communist regime.
Between 2006 and 2014, Kateřina Tučková pursued postgraduate studies in art history at Charles University in Prague. She published several publications on contemporary Czech fine art such as Transfer (Academy of Fine Arts in Prague, 2008), Slovem i obrazem (Told by Words and Paintings; Nakladatelství Vltavín, 2008), Normální malba (Normal Painting; ARSkontakt, 2008), and others. In many of the publications, she combined her professional and literary skills – her book Můj otec Kamil Lhoták (My Father Kamil Lhoták) is a fictionalized biography of painter Kamil Lhoták, told from the point of view of his son (Nakladatelství Vltavín, 2008).
The texts Na hraně příběhu – Sochy v ulicích (On the Borderline of a Story – Statues in the Streets; the House of Arts in Brno, 2013) and Fabrika – příběh textilních baronů z moravského Manchesteru (Factory – The Story of Textile Barons of the Moravian Manchester; Host, 2014) were published as exhibition librettos. The short stories included in the first mentioned publication inspired participants of the Brno Art Open exhibition to create fourteen statues for the streets of Brno. Fabrika was published on the occasion of the exhibition entitled Brno – Moravian Manchester held by the Moravian Gallery at the turn of 2014 and 2015.
In 2014, Kateřina Tučková finished her postgraduate studies at the Institute of Art History, Charles University, with her thesis on Skupina Radar (The Radar Group), focusing on creative groups and their work during the communist regime.
She also wrote a biography of writer Věra Sládková, Věra Sládková, prozaické dílo (Věra Sedláková, Prosaic Work; Nakladatelství Vltavín, 2009).
In 2018, Kateřina Tučková entered the world of theatre with Vitka, her theatre play inspired by the life of Czech composer and conductor Vítězslava Kaprálová (Husa na provázku Theatre, 2018). The play was nominated for the Critics Award for the Production of the Year (2019). Kateřina Tučková also dramatized the novel Brother of Sleep by Austrian author Robert Schneider (Švanda Theatre, 2018). Her novels The Expulsion of Gerta Schnirch and The Zitkova Godesses have been adapted by the Brno City Theatre, the Zlín City Theatre, the HaDivadlo Theatre, the Husa na provázku Theatre, the Divadlo pod Palmovkou Theatre, 3D Company, and the student group KUK.
Kateřina Tučková has also collaborated with many magazines such as Respekt, Salon – kulturní příloha deníku Právo, Deník N, Tvar (where she made her debut as a fiction writer in 2003), Literární noviny, and Weles. However, she does not collaborate with the media that are part of the publishing imperium owned by the current Prime Minister of the Czech Republic, Andrej Babiš, since she thinks that the media owned by a politician represent a conflict of interests and an unacceptable violation of the values of a democratic society.
Kateřina Tučková lives in Prague and Brno, Czech Republic.

2013 / Magnesia Litera – Readers’ Award for the The Zitkova Goddesses

2010 / Magnesia Litera – Readers’ Award for The Expulsion of Gerta Schnirch